Over the past few weeks, corporations around the country have been evaluating internal and external communications, practices, values and actions regarding racial and economic equality and Black Lives Matter. Some corporations have spoken out and taken action, while others have remained silent. It has brought attention to corporations’ histories and has made having a plan of action to address these issues a necessity.

Corporations must address these issues and take action carefully. Consumers are aware of brand activism now more than ever, and certain actions could be seen as ingenuine or tone-deaf. Consumers will take into the account the diversity of company boards, overall company employee diversity and where organizations are investing their dollars.

As large brands and corporations have been releasing statements and signing pledges, the public has been raising questions about how genuine these statements and pledges really are. Over social media, consumers and employees are seeing these statements as not being enough. Consumers and employees want companies to take action, whether that is through donations or education on these issues — for themselves and their employees. In the examples below, I have outlined how corporations are taking action and addressing these issues.

Some companies have taken a bold and action-filled approach though statements, donations, supporting new law and promoting internal education. For example, The Home Depot CEO Craig Menear released a statement announcing the company will be contributing $1 million to the Lawyers Committee for Civil Rights Under Law and that he has “begun working with our associate resource groups to facilitate internal town halls to share experiences and create better understanding among us all.” In addition, Menear signed a letter of support for passing the Georgia Hate Crimes Act, a specific and clear bill against hate crimes.

Other companies have had to reevaluate their stance and policies to support their employees. For example, Starbucks and Taco Bell had to revisit their policies on employees wearing Black Lives Matter attire into work. Starbucks, originally stating these BLM accessories did not “currently adhere to policy,” reversed their statement and now allow baristas and other employees to wear Black Lives matter T-shirts and pins. Taco Bell in a recent statement had to address an employee being fired in Ohio for wearing a Black Lives Matter mask into work.  After apologizing for the situation, Taco Bell said in a statement, “Our goal is to ensure our policies are inclusive and keep our team members and customers safe…while our policies at restaurants do not prohibit Team Members from wearing Black Lives Matter masks, we are working to clarify our mask policy so this doesn’t happen again.”

Corporations are finding other ways to make employees feel seen and recognize these issues. Companies such as Target and Nike, in addition to making statements and donating tens of millions of dollars to BLM organizations, have announced that Juneteenth will be an official corporate holiday in efforts of supporting their employees.

Brands are also considering their packaging as it pertains to systematic racism. B&G Foods, parent company of Cream of Wheat, announced they will be reviewing their packaging regarding concerns of the Chef image: “We are committed to evaluating our packaging and will proactively take steps to ensure that we and our brands do not inadvertently contribute to systemic racism…B&G Foods unequivocally stands against prejudice and injustice of any kind.” This comes after the parent companies of Aunt Jemima, Uncle Ben’s and Mrs. Buttersworth’s announced they will be revisiting the imaging associated with these products due to the outcries of racial stereotyping.

As a public relations professional navigating this new world, it is encouraging to see corporations and brands speaking out, taking action, standing by their values and reevaluating and adapting their policies. I am happy to see that companies are taking steps toward education, awareness and recognition to make their employees feel seen and respected. From a public relations view, it is apparent now more than ever, that consumers want to see brands standing up for their values and taking action. As our country continues to address racial and economic inequality, corporations will continue to respond and evolve their programs to support their employees. For a full list of companies addressing BLM, see here: https://www.cnet.com/how-to/companies-donating-black-lives-matter/

Communication Strategies for Nonprofits During COVID-19

Tips For Working At Home 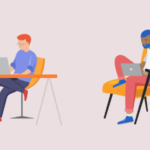 On Thanksgiving Eve, I Am Filled with Gratitude

Public Relations During a Pandemic

Why the Generation Gap Can Be a Good Thing